The year 2022 will go down in the history of GreenWay as the year in which the company raised investment capital of EUR 85 million, expanded the EV charging network by over 170 facilities, implemented the largest charging infrastructure project for a business in Poland, and doubled the team.

Last year, GreenWay Polska added 174 new stations to the generally accessible charging infrastructure in Poland. The company already has 497 public stations in Poland, of which 257 are DC chargers and 240 are AC. Converting this into the number of connectors gives a total number of 1099 charging points for EV drivers. The high development of the GreenWay charging station network in 2022 resulted, among others, from the purchase of the Revnet network, which allowed to increase in the number of stations by 70 AC chargers. Currently, all these stations operate under the GreenWay brand.

There is more to it. In addition to public charging stations, GreenWay already manages over 350 private stations used by companies to charge their electric fleets.

In addition to the construction of new facilities, the company also focused on expanding selected locations with additional charging stations and increasing the charging power of the existing infrastructure – 43, 50 kW chargers were replaced with 150 kW or 200 kW devices. In total, there are 97 charging stations offering a charger power of 100 kW and more in the entire GreenWay network. The infrastructure modernization process will be continued this year.

More and more stations in the network of the largest operator in Poland offer green energy. In 2022, GreenWay Polska received Poland's first green Certificate Energia 2051 from Polenergia. Last year, the number of "green" stations increased to 145.

In 2022, the number of registered GreenWay customers reached  52,000 users, of which 44 thousand are drivers from Poland. Last year, a total number of 26,000 drivers joined the entire GreenWay.

The growing network and the growing number of users require high-quality service and user-friendly solutions. That's why, in 2022, the GreenWay IT team provided customers with a completely new mobile app, which is used by a large number of drivers. 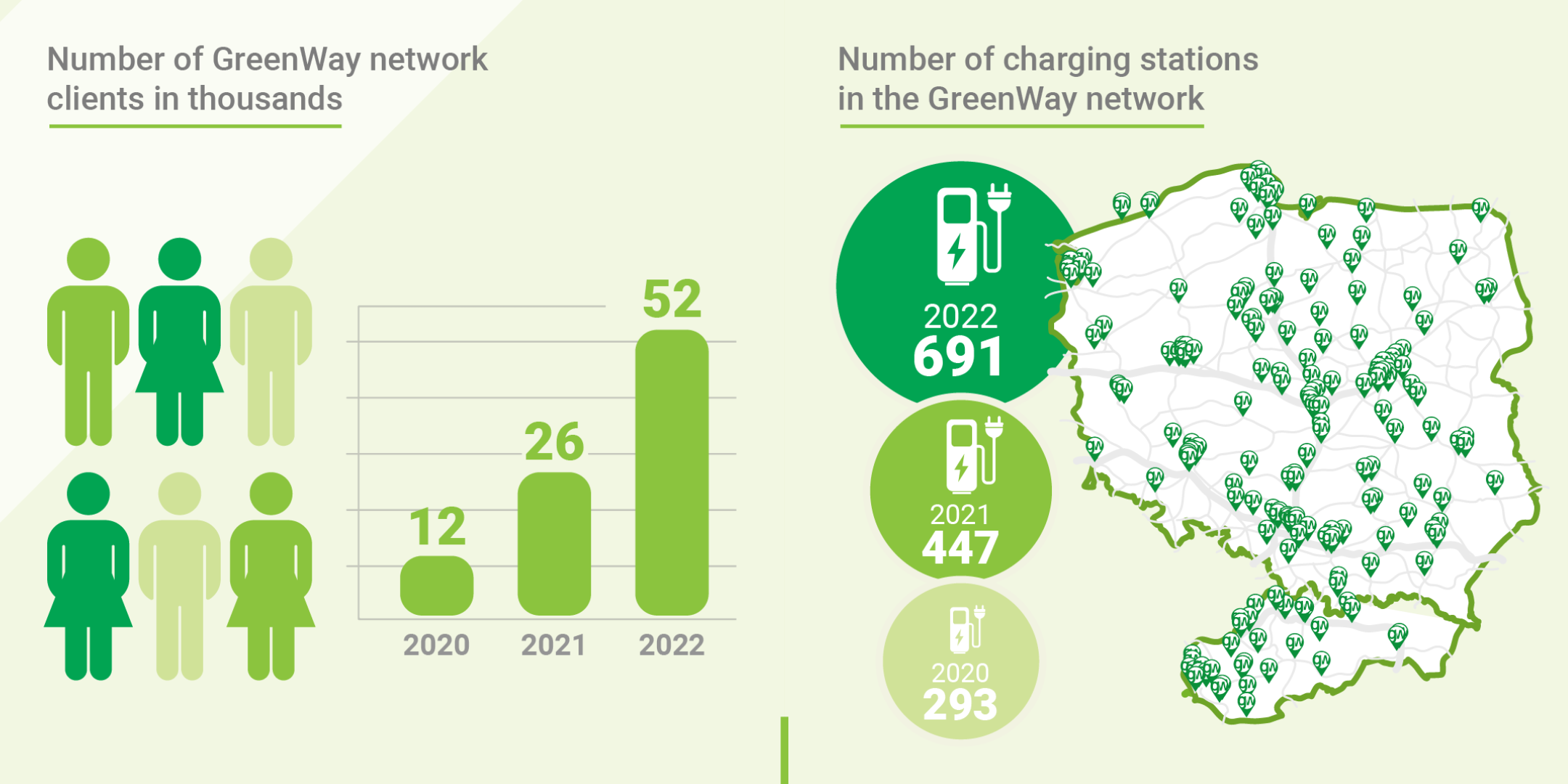 Millions of euros for investments

The beginning of 2022 was extremely important for GreenWay from the point of view of further development. The company acquired new investors and secured an investment of EUR 85 million for further development. It was the largest known investment in the electromobility sector in this region of Europe, and at the same time, it confirmed the high development potential of this industry in the region and the strong position of GreenWay on the market.

– Thanks to the investment, we have significantly accelerated the development of the public charging infrastructure. The development is being executed both by building new stations and consolidating the market - said Rafał Czyżewski, president of GreenWay Polska, after obtaining the funds. - The second pillar of our strategy is to build the position of the first-choice partner for businesses that are increasingly interested in electromobility. The support of investors in this area is an extremely strong development impulse for us.

Obtaining such funds will enable GreenWay Polska to invest PLN 330 million in the development of the charging network by 2026. For EV drivers, this means 1.5 thousand new charging points in Poland in less than four years.

Last year also marked the entry of GreenWay as a leader into the EXPAND-E consortium, to which the European Commission will provide EUR 70 million for the construction of 2,000  new charging stations. This is the largest project of this type co-financed by the European Commission so far. The three-year contract covers the installation of new stations or the extension of existing locations in over 450 locations in 22 countries of the European Union. As part of this investment, GreenWay plans to build in Poland, by the end of 2025, approx. 260 charging points with a power of 150 kW for passenger cars and 10 charging points with a power of min. 350 kW for vans and trucks. 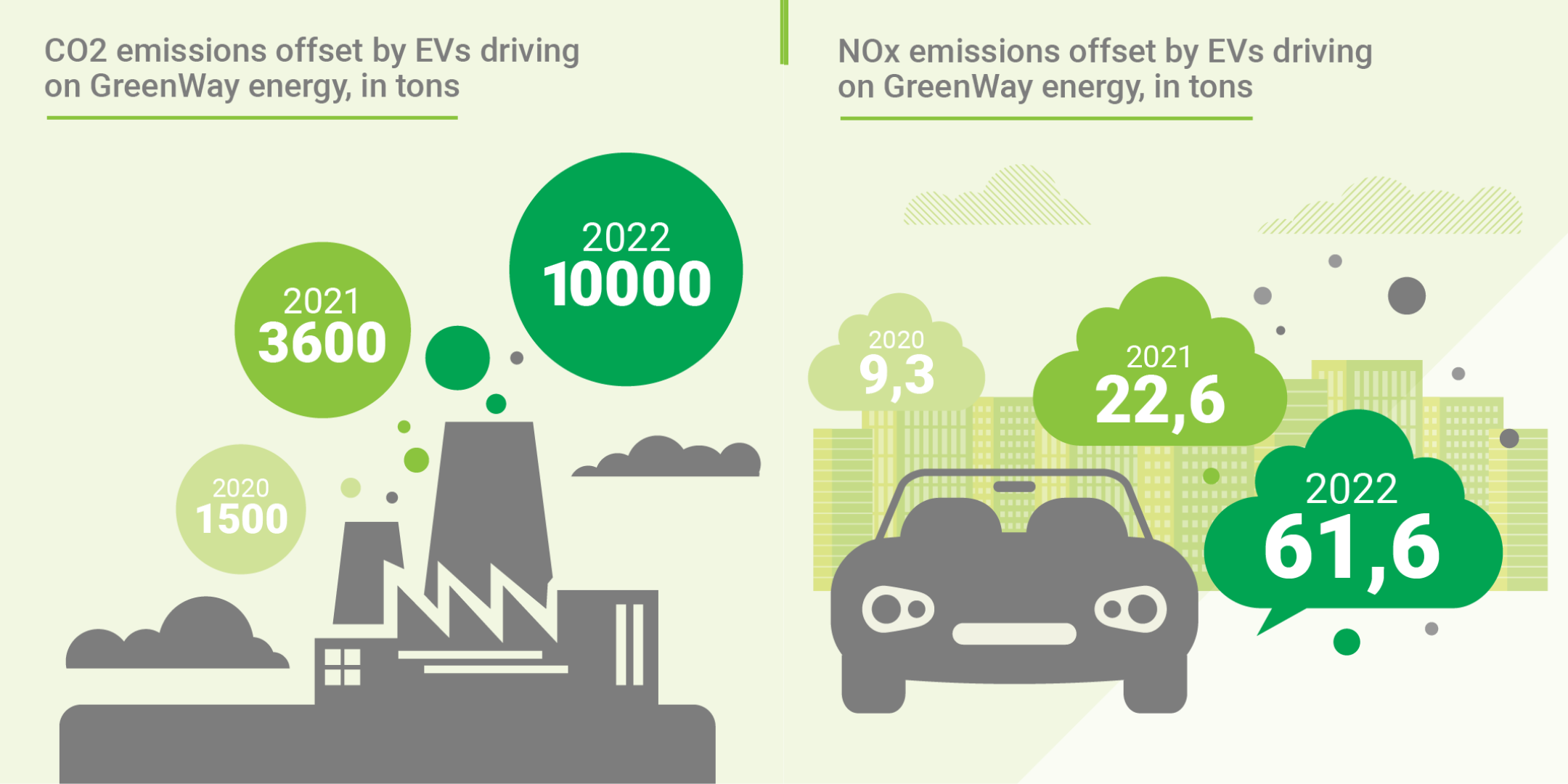 The development of public charging stations goes hand in hand with solutions for business and company fleets. The year 2022 is also the cooperation of strategic service providers in their industries: GreenWay as the leader in electromobility and InPost as the leader in the parcel delivery market.

As many as 201 charging stations for electric cars have been built in InPost's logistics centers. The vehicles are used by couriers and for deliveries to parcel lockers in the largest cities in Poland.

– It was a year full of challenges, but also working together to support the development of electromobility, expanding access to services and even greater care for their quality. We have also shown that our course for B2B cooperation is right, and the implementation of charging stations in this scope for InPost confirmed our competence in this area - sums up 2022 Rafał Czyżewski, president of GreenWay Polska. – 2023 will be another year in which we will expand and modernize the network and encourage private drivers as well as those responsible for company fleets to participate in the electromobility revolution.

GreenWay is also the operator of charging infrastructure belonging to leading brands such as IKEA, Leroy Merlin, Hyundai, BMW, KIA, and many others.

The company also has a comprehensive offer for the business, including the design, delivery, installation, and management of charging stations and their subsequent service.

Twice the size of the Green Team

In 2022, the GreenWay Polska team almost doubled - from 51 people in 2021 to 93 in 2022. Most people started working in the Network Development Department, which was joined by 12 new employees.

An increasingly large part of the team is also the Service Department, whose task is to take care of the GreenWay network and install new charging stations or replace them with new, faster chargers. In 2022, the company expanded its base of branches of the Service Department in the country by another three cities - Warsaw, Wrocław, and Gorzów Wielkopolski, where together with the previous existing branches in Gdynia, Łódz and Sosniowiec works 25 people work. The GreenWay service also provides maintenance services for many manufacturers of charging stations operating in the Polish market.

The growing number of electric cars on Polish roads has contributed to a significant increase in demand for charging services in the public GreenWay network. As a result, the company delivered 7.6 GWh of energy to customers in Poland - over 200% more than last year.

Enter the emobility world with GreenWay!

Would you like to stay up to date with all promotional campaigns, available discount coupons, special offers, and the latest information? You can receive them via e-mail or SMS. You don’t have to be concerned about sharing some personal data, because at GreenWay we never share it with other companies for marketing purposes.

You can adjust the settings by clicking on individual items. More information about the GDPR: Personal data protection policy.